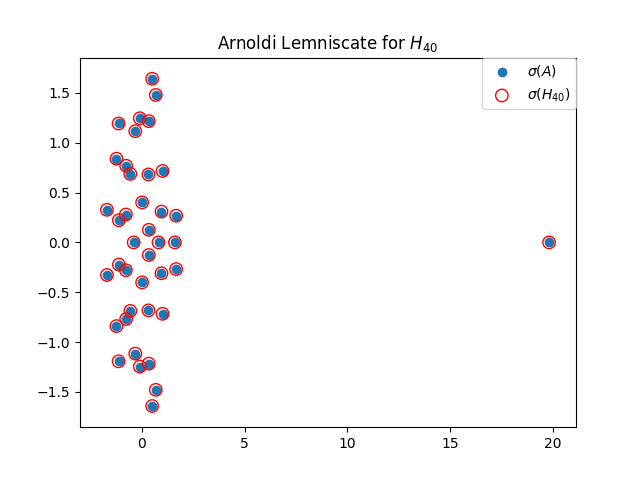 During my first year of undergraduate Maths degree at University of Pavia I was seriously evaluating the possibility to change degree course to something more related to Software Engineering. Thankfully I came across the course of Numerical Linear Algebra, I remember that during that course ideas that I hadn’t fully understood until that moment become clearer and I was fascinated in particularly by the combination of scientific computing and pure mathematical analysis of the methods that were treated in the course. My attention was captured by a very interesting algorithm known with the name of Arnoldi iterations.

In this review we will focus our attention to the Arnoldi iterations that is a numerical linear algebra method first introduce in 50s by W.E Arnoldi \cite{arnoldi1951}. To understand what this method does and where it could be used we will take a brief detour in some general method of numerical linear algebra. The key definition needed to understand Arnoldi iterations is the following:
Definition – Hessemberg
A matrix

is said to be in the Hessenberg form if is has such a shape that:

has to be shaped as:

We will now try to show why this particular matrix form has a great importance in numerical linear algebra, considering the eigenvalue problem.
Let’s consider a square matrix

that verify the equation:

. We know from linear algebra that this problem is equivalent to computing the zeros of the characteristic polynomial of

are the eigenvalue of

and we call spectrum of

A numerical approach to solve this problem could be the power iteration method, a general overview of this method could be found in Trefethen, Lloyd N., and David Bau III. Numerical linear algebra. Vol. 50. Siam, 1997. Briefly this method consist in studying the sequences:

Under the assumption that

is hermitian, that the spectrum of

and that the randomly chosen vector

has no zero component in the direction of

the eigenvector associated with

, is possible to prove that the sequence

, the actual proof could be found in Trefethen, Lloyd N., and David Bau III. Numerical linear algebra. Vol. 50. Siam, 1997.
The main cost for the power iteration method is computing

, in particular the vector matrix product

, to be precise to compute

flops. We could easily understand that for each zero entry of the matrix

the computational cost is reduce therefore we aim to represent

in the form with the greatest number of zero entries. If

is hermitian spectral theorem tells us that

could be diagonalized, therefore

being a diagonal matrix. Clearly the diagonal form would be the best in terms of zero entries, unfortunately knowing the decomposition is equivalent to know the eigenvalues of

, and that is the problem we are addressing. The next best matrix forms in terms of zero entries are the tridiagonal, the triangular and the Hessenberg form. If we try to express

, detail about the Schur decomposition could be found in Trefethen, Lloyd N., and David Bau III. Numerical linear algebra. Vol. 50. Siam, 1997 and Quarteroni, Alfio, Riccardo Sacco, and Fausto Saleri. Numerical mathematics. Vol. 37. Springer Science & Business Media, 2010. We will come back to the QR decomposition cost later on because reducing a matrix in Hessenberg form will be a great advantage when computing QR decomposition, more information regarding the QR algorithm could be found Watkins, David S. “Understanding the QR algorithm.” SIAM review 24.4 (1982): 427-440.
If

in the tridiagonal form by orthogonal transformations.

be an hermitian matrix, it exist an unitary matrix

such that is verified the following equation:

being a tridiagonal matrix.
Proof
We will prove this by explicitly building the matrix

, in this way we the reader could get an idea of how the Lanczos algorithm works. Lets choose a random vector

of unitary norm, and we define the following quantities:

we compute the sequences:

is the null vector we take as

a random vector of unitary norm. Now we define the following matrix:

Carrying out matrix multiplication thanks to how we have defined

Unfortunately for non hermitian matrix nothing tell us that we could represent the matrix in tridiagonal form, in fact the best we could hop to achieve is representing the matrix in the Hessenberg form. From what we have said until know we know that if

is hermitian to apply the power iteration we wont to represent it in tridiagonal form, but what happens if

is not hermitian or even normal ?
Well if

isn’t hermitian we could not use the power iteration method, instead we use the

algorithm consist in studying the sequence:

. Is possible to prove that

converges to an upper triangular matrix, therefore we have performed a Schur decomposition and we could find the eigenvalue of

along the diagonal entries of

. Further detail on the

is expressed in Hessenberg form the cost of

So far we have understood that that given a matrix

if we wont to find

its greatest eigenvalue we wont

to be transformed by orthogonal transformation into a tridiagonal matrix if

is hermitian or to be represented in Hessenberg form else way. To be precise we just wont a method that represent

such that is verified the following equation:

being a matrix expressed in Hessenberg form.

We will prove as well this result by direct construction of the decomposition shown in the previous equation, even if in very peculiar cases this construction might fail, as we could see in Embree, Mark. “The Arnoldi eigenvalue iteration with exact shifts can fail.” SIAM Journal on Matrix Analysis and Applications 31.1 (2009): 1-10. Such failures are due to computation problem and not to the linear algebra argument standing behind the algorithm. Lets start from a random vector

with unitary norm. We will then build the sequence of vector

We will as well define the entries of a matrix

Now by matrix multiplication we could show that the matrix

being the matrix defined as:

by breaking this down equation we could easily obtain a method to perform Arnoldi iteration.

We could write such a method in pseudo code as follow:

factorization, the code could be found in Trefethen, Lloyd N., and David Bau III. Numerical linear algebra. Vol. 50. Siam, 1997 and Quarteroni, Alfio, Riccardo Sacco, and Fausto Saleri. Numerical mathematics. Vol. 37. Springer Science & Business Media, 2010 we immediately understand that the Arnoldi iterations is nothing more then the Gram-Schmidt method applied on the matrix:

, we will often refer to such matrix simply by writing

. More information regarding Krylov matrix could be found in Trefethen, Lloyd N., and David Bau III. Numerical linear algebra. Vol. 50. Siam, 1997, for now we are only concerned with the fact that is the projection of matrix

in the Krylov subspace

defined as the subspace spanned by the vectors:

. What we have just said will lead to the following result:

is the Krylov matrix of order

then the following equation is verified:

be the Hessenberg representation produced by Arnoldi iterations, with

Now a very legitimate question arises, why the Schur decomposition was discarded as a method to produce a zeros filled representation of

. This question shine a light over the true beauty of Arnoldi iterations, its iterative nature. What we mean when we speak about iterative nature is the fact that if we stop the Arnoldi method before computing the vector

we have built the Hessenberg matrix

In the next section we will discuss the reason why to solve the problem presented in the Introduction, ie computing

, could be enough to study the matrix

, imply that working with an approximation of

. To simplify the discussion we will refer as Arnoldi decomposition of order

that verify the following chain of inequalities:

, exactly the same scenario of the previous discussion. To compute the eigenvalue of

we could perform an Arnoldi decomposition of order

and the apply the

algorithm, the question we are going to ask ourself is what happens if instead of performing an Arnoldi decomposition of order

we perform an Arnoldi decomposition of order

and the apply the

algorithm.
The basic idea that permeate this section is the following: if we consider the Arnoldi decomposition of order

, shown before, we know that it is the projection of

in the Krylov subspace of order

to preserve some information regarding the spectral properties of

. Further more considering the structure of

and the fact that when multiplying by

all the components in the directions of

get amplified more then others, since

is the greatest eigenvalue, we expect in particular spectral information regarding

more then others. We could verify numerically that such a reasoning is working by computing the eigenvalues of

As explained before the spectral information resinate particularly for greater eigenvalues, therefore we would expect for

could still provide useful information regarding

, as is clearly visible in the Figure before where for

the greatest eigenvalue of

is very close to

. In this section we will present the standard explanation to why such a phenomenon occurs, in particular we present the explanation proposed in Trefethen, Lloyd N., and David Bau III. Numerical linear algebra. Vol. 50. Siam, 1997, Watkins, David S. “Some perspectives on the eigenvalue problem.” SIAM review 35.3 (1993): 430-471 and Greenbaum, Anne, and Lloyd N. Trefethen. “GMRES/CR and Arnoldi/Lanczos as matrix approximation problems.” SIAM Journal on Scientific Computing 15.2 (1994): 359-368. But before presenting the idea mentioned before we need to characterize further the Arnoldi iterations and we would do so thanks to the next result:

has full rank then there is one monic polynomial

being a generic monic polynomial of degree

is unique and is give by:

is monic the following equation holds for some

and so by Caylay-Hamilton theorem we know that

is the characteristic polynomial of

Now lets start by tackling the first bit of the problem proposed before the last proposition, ie why the eigenvalue of

get closer and closer to the eigenvalue of

must be as small as possible, in particular if

is the characteristic polynomial of

and that is as small as it goes. Therefore

get closer and closer to

as well become closer and closer to

. Later on we will try to take a different approach to formally prove that

. The second bit of the problem presented above is the convergence speed, in fact even if we gave a reasonable idea to why

, we haven’t yet proved why even for a small

is a good approximation, in terms of roots, of

In particular we observe numerically that if we call

the greatest eigenvalue of

, such a phenomenon can be observed in Figure above. To have an idea regarding why this phenomenon occur we shell take in consideration the matrix:

The characteristic polynomial of

, as candidate for the characteristic polynomial of

we have that for 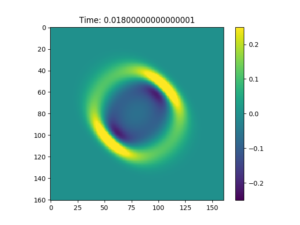 Recursive use of the Woodbury identity to prove the Neumann series expansion.