By Umberto Zerbinati on Monday, November 9, 2020

I’m following a very interesting course at KAUST titled Applied Mathematics. In this course some beautiful ideas are introduced such as ODE, variation of parameters, Greens function, separation of variable for ODE, PDE and eigenvalue problems etc. I had previously seen some of those concepts in some courses I attended at University of Pavia, in particular in the courses of Analysis 2, Analysis 3 and Equations of Mathematical Physics held respectively by Professor Gilardi, Professor Schimperna and Professor Toscani. In each of this courses ideas related to the one presented in the class I’m now following were introduced, so I thought that would be a nice idea to collect some of the ideas presented in all those courses as a series of posts. In particular I hope this might be a nice way to review the classwork materials and to get a broder prospective of the subject.

The first concept I like to introduce is the one of ordinary differential equation (ODE), in particular given a function

we search for a function

-th derivative of the function

Remark Let me make some remarks, first of all the functions are usually defined on

since derivatives of a functions (in particular when we work with multivariable functions) are defined with meaning on an open set. But we notice that for the derivative to exist we need for both

to be defined as

now we can image this as the composition of the function

. For this to make sense we notice that

needs to be an accumulation point for both

(defined with respect to

), and this is the case for

. Therefore we can actually work with functions defined on

The general idea behind an ODE is to determine the function

given how it varis with respect to its indepepdnet variable, here called

We will begin our discussion studying a very simple ODE, i.e.

this is classified as a first-order autonomous linear differential equation. We say that the equation is of first-order since in (3) we only have the first derivative of

. Furthermore, we say that (3) is autonomous because there is only explicit dependence to

and its derivative. Last but not least we say that (3) is linear if it exists a sequence of functions

and we check that

What happens if we do an other ansatz, i.e.

In general we find out that for any

is a solution of (3). This is the concept of general solution: “Given a generic ODE such as (1) it has infinite solutions that are obtained varying

is the order of the ODE.”. We are interested in solving (1) for a unique solution, in particular we will focus our attention to first-order ODE. If we go back to the general solution of (3) and we fix the value of

then we can find a value for

This definition of the IVP makes sense sicne

is defined also on

in virtue of one of the previous remarks.

Example – Growth and Decay An initial value problem as the one defined above models a phenomena involving a population growth or decay. In particular let

. Then the IVP becomes,

the IVP models the decay of the bacterial population. 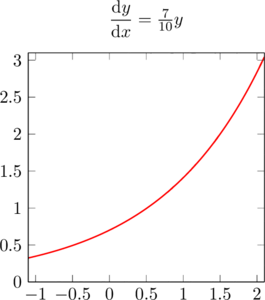 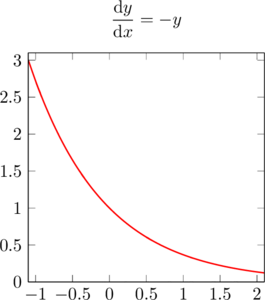 A Bit Of Theory

I’d like to introduce in this section a bit of theory regarding uniqueness and existence of a solution to an IVP. The usual approach would be to introduce a solution operator thanks to the Volterra’s lemma and prove that the operator is a contraction, then we use the contraction theorem to produce a “small” solution, later on, small solutions are used to create a maximal solution which is extended on

. Now, this approach requires some knowledge of Hilbert space and linear operators. For this reason, I’d like here to present a more constructive proof for the existence and uniqueness result, this is the approach presented by Professor Gilardi in “Analisi matematica di base”. We begin introducing Volterra’s lemma.

be a continuous function, then it exists a C^1 function

that is a solution to (4), in particular

solution to (4), then thanks to the fundamental theorem of calculus:

be defined as in (6), then by the theorem of the derivative of the integral function we have:

this means that since

. Furthermore if we take

Another lemma that we will use to prove the uniqueness of the solution to the IVP is the Gronwall’s lemma.

Lemma – Gronwall Given a continuous function

there if nothing to prove, so we only consider the case

Therefore integrating we get the following inequality,

this combined with (10) yield

. We are now ready to prove the theorem of existence and uniquness of a “big” solution.

Theorem – Existence and Uniqueness of “Big” Solution to the IVP

a continues function such that it exist

it exist one and only one

that verify the following IVP:

Proof Thanks to Volterra’s Lemma we just need to prove that it exist a unique solution to the integral equation (6). We begin proving the uniqueness, in particular we assume

are solution to the integral equation (6). We subtract

and use the integral equation,

using the Lipschitz continuity in the second variable we get that,

now we observe that the function defined by

and therefore using the Gronwall Lemma we have

Now we prove the existence of a solution to the integral equation, to do this we build a sequence of functions

is well defined and there fore even for

the integral in the above expression is well defined, and so on. Now we prove the following points:

To prove point 1, we observe that we can define

. This means that we can limit our self to prove the convergence of the series

. We use Liptshiz continuity in the second variable and the definition of

and we limit our proof to the

which is not restrictive since

can be chosen freely. Now

functions on a compact set, therefore

We observe that thanks to the criteria of absolute convergence if

the series converges, and we can define the functions

Now we proceed to prove point 2, to do this we will focus once again our attention on the domain

. We notice that by the definition of

using the (26) we have that following estimate for the error,

tends to zero, and therefore we can prove easily the continuity of

. In particular we can fix

is continuous by hypothesis also

verify the (6), once again we focus our attention on the domain

can be fixed freely. We define

and the solution to the Volterra equation:

since we already notice that

Definition – Separable ODE We say that an ordinary differential equation is separable if when it is expressed in normal form is written as:

functions defined on the domain of the ODE, this hypothesis grants us the existence of antiderivative for both h(y) and g(y) more detail can be found in G. Gilardi Analisi Matematica di Base.

The solution of a separable ODE in theory is an easy matter, in fact from (36) we obtain,

integrating both sides and simplifying

now if we carry out the integration in (38) we obtain a family of implicit solutions of the form:

are respectively the antiderivative of

can be found thanks to the condition of the initial value problem.

Since is the first time I speak about implicit solutions I’d like to show an example of the separation of variable technique that I borrowed from the book Advanced Engineering Mathematics by D. G. Zill.

we can solve this by separation of variable, in fact using (38) we obtain:

. As mentioned before the second condition of the IVP is used to compute the value of the constant C, 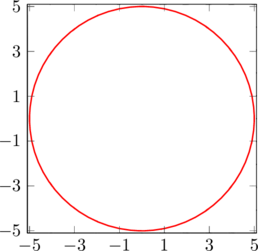 Remark What happens if

? Well the integrals in equation (38) would lose meaning because the integrand

is not defined at the point

. Now we notice that if

is a memeber of the family of implicit solutions of the ODE.

Example – Logistic Growth Model Another nice example of the technique of separation of variables is the logistic growth model. This ODE models the growth of a population (such as a Bacteria population on a Petri dish) under the following assumptions:

represent the portion of the ideal maximum population. Under this assumption we get the following ODE,

on the two sides and divide by

to obtain the equation, 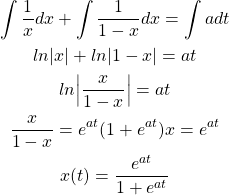 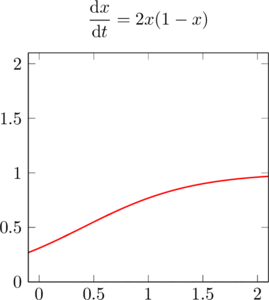 I’d like now to introduce a very nice tool to solve first order ODE, this method is named the integrating factor method. Let us consider a first order ODE written in normal form,

now we introduce the integrating factor associated to the ODE, defined as follow:

we multiply both sides by

this lead to the solution, which is given by:

We can also notice that differentiating and using the product rule on (50), i.e.

, we obtain the following equation:

if we divide by

now we multiply the ODE by the integrating factor to obtain an easy to solve ODE,

now we integrate both sides, using

to find an explicit expression for 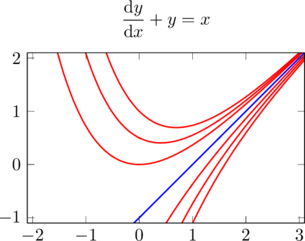 The above example is borrowed from the book Advanced Engineering Mathematics by D. G. Zill.

In this section I’d like to introduce a particular class of first order differential equation, exact ODE.

is associated with the ordinary differential equation

, that can be expressed in standard form as:

There is an easy criterion to check if an ODE is exact, and this is based on Schwarz theorem, which states that for a

. Therefore given an exact ODE, we have that the following identities must be verified:

Exact ODE can be solved easily thanks to the following observations. We observe that since

now we are left with integrating h'(x), to find an implicit solution to the ordinary differential equation.

Example In this example I’d like to solve the following ODE,

so we multiply by

to obtain a differential form,

now we recognize that this is an exact differential equation,

This tell us that it exist a function

now we notice that since 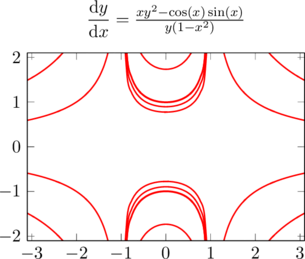